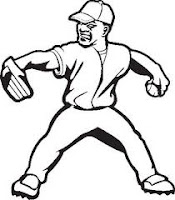 One of the strange yet typical mid-life moments is the realization that your favorite sports team isn't going to call you up to the big leagues.  This happens as you become older than everyone playing in the sport.  In fact, you realize you've become older than everyone coaching the sport (for example, the D1 head coaches at all the local universities are all younger than I am.)  In the pro ranks, such an event, for me, occurred many, many years ago in basketball, football and hockey where sports' careers usually end before 30.  (Thank goodness for golf, by the way, where occasionally a Freddie Couples or Tom Watson leads a major in the third round--even if they run out of gas and end up losing in the final round, but I digress....)  In baseball, however, my new favorite player is Jamie Moyer.  I started following baseball's oldest player a couple of years ago when, pitching for the Phillies, he was even then the last remaining player older than I.  Moyer messed up his elbow and sat out the entire season last year but promised to try and make a comeback.  I kinda had my doubts about such a bold statement, but I nonetheless cheered him on.  Sure enough, the 49-year old Moyer showed up at Colorado's spring training and ended up cracking the starting rotation.  I should point out that when Jamie entered the big leagues in 1987, the Rockies didn't even exist.  Anyway, Moyer started the season with a couple of losses, but earlier this week he beat the San Diego Padres fair and square and broke an 82-year old record by becoming the oldest modern era pitcher, at 49-years and 150-days, to win a game.  Although his fastball rarely tops 78 mph, he gives us old pharts hope that maybe there still a chance, still a call in our future by some team who is desperate for a light hitting first baseman with a bad back...  Anyway, by all accounts, Jamie is a nice guy, too, and gives freely of his time towards a charity he and his wife oversee.
Meanwhile, if perchance I meet him on the street, I might even ask for his autograph someday...that's because he still fits in my own personal autograph rule:  "I will not ask someone younger than me for their autograph."  Obviously, I'm quickly running out of potential signees (however, there is an asterisk for "superstars"...if Tiger is standing next to me at the Piggly-Wiggly in Boca Raton, I reserve the right to make an exception to the rule!)
So three cheers and a tube of Ben-Gay for Jamie Moyer!  Keep on mixing up those pitches as long as you are able.  And to baseball GM's, if you're looking for someone to suit up to be the "second oldest guy in baseball," I look pretty decent in a uniform--of course, you'll need to get past the whole "belly thing."
Posted by Dry Martini at 3:01 PM No comments:

Even his first name was cool.  Cal Higgs died the other day.  Cal was 96.  I hadn't seen him for awhile and was wondering if he was okay.  Cal lived at Maple Knoll, home of our radio station, and would occasionally take a wheeled "stroll" on his maroon/red scooter with a headlight.  He wasn't one to chat very long and came off as a little gruff, but I think he welcomed those times when I spied him tooling down the hallway outside the station and I'd come out to visit a spell.
Most of us know a few Cals--people who have lived incredible lives or had incredible talents that otherwise would go unnoticed.   That was Cal.  On first glance, he was a gentle, bear-sized fellow with bulldog jowls.  It wasn't until I really got to know him that I was truly amazed about Cal.
In 2007, I decided to commemorate the 60th anniversary of the demise of the Island Queen steamboat.  I learned about a fellow named Cal Higgs who was there when the boat blew up lived upstairs.  Cal was the bass played for the Clyde Trask Orchestra, the boat's house band.  Armed with a recorder, mic, and script, I happily trudged upstairs.  Cal, of course, gave a great interview despite a quivering voice.  He was a little reluctant at first to be interviewed, as many older people are, but gradually relaxed.  By the end, I think he wanted me to stay awhile, recorder turned off, to chat--so I did.
Cal's apartment was lined with fantastic paintings.  Almost everyone an oil, they ranged in size from post card to the kind one sees over a couch.  Not too fond of "modern" art, I loved these paintings because they were very, very realistic.  In fact, some where so "real," it took a close examination to note that they were indeed paintings and not photographs.   The paintings were largely set around Cincinnati;  Hyde Park Square during the day, Over the Rhine circa 1950, the Cincinnati fountain at night.  They were magnificent.  I'm sure you have guessed by now that Cal painted each and every one.  After service in the war, Cal came back to school and in addition to his musical interests, he refined his longstanding love of painting.  The private gallery of Cal's art wasn't seen by many people--perhaps his housekeeper or maintenance man.  He routinely declined to participate in Maple Knoll's occasional resident and professional art shows.  None of the paintings was for sale.  With no children, I wondered what would happen to them someday.
By the time I got to know Cal, he had Parkinsons and his hands shook uncontrollably.  I thought of what a cruel trick for a man with such talent.  His paints and easel stood at the ready in a corner of his living room but he admitted he hadn't picked up a brush "in many years" and, indeed, his oils were probably all dry.
As someone who always wanted to learn oils, I blurted out that maybe he could give me lessons.  I could come up once or twice a week for an hour and I'd even pay him something.  He thought about that and said he'd "let me know."  It never came to pass and, to be honest, I'm sure such an arrangement would have violated some workplace employee/resident rule.  But it seemed like such a waste to let this talent go untapped.
The last time I ran into Cal was about a year ago.  There was an exhibit in the hallways from the Cincinnati Art Club and I could see Cal giving his careful scrutiny of each work.  "Your paintings are better than these," I offered.  "I think you're right," he not-so-modestly-but-honestly replied.  We never crossed paths again.
I hope Cal is sitting on some heavenly street scape with his canvas, palette and some fresh oils.  His hands and arms are strong and fleet and precise and he is creating another masterpiece.  So long, Cal...I wish I could have know you better.
Posted by Dry Martini at 6:25 AM No comments: