Things I Miss About My First Car

Earlier this week, I was at the pump getting gas when a mid-'80s Somethingorother pulled up to the next pump.  The driver came around back and popped back the license plate and started filling up.  Wow....I'm amazed that I had forgotten all the cars I owned that also had the fuel intake hidden behind the license plate.  It was pretty common at one time.  When exactly did they disappear?  Although it was a little tough to use one handed--due to a spring the size of an anaconda--it was a pretty nifty idea and it didn't matter to which side of the pump you pulled up.   It got me to thinking: so what other things about my first car, a 1972 Chevy Impala Convertible, have been made quietly obsolete by automakers?

Well, I still really miss the reliable little high-beam switch on the floorboard.  The "click-click" sound and sensation made high-beam headlights fun and gave the left foot something to do.  Remember playing "gotcha" with cars in the opposite lane?
While my Chev didn't have them, my mom's '71 Plymouth had cozy-wings on the side windows.  Those seemed to make a lot of sense--letting in just enough air without disrupting conversation or the radio.  Not sure why the cozy-wing was ever dropped other than expense, I guess.
My Chevy did have fender skirts, which gave it an elegant appearance that far exceeded its actual luxury.  They were easy to take on and off, just a discretely hidden lever underneath.  I did not have curb feelers, but considered them one time.  Ask an older person about curb-feelers.
I did have white walled tires, though, and my dad showed me how to make them sparkle using Comet and warm water and a stiff scrub brush.  I remember getting tires in the 1990s, when white-walls were out of "style" and telling the guy to mount them backwards to hide the stripes--I kinda regret that now, since white walls have completely vanished.
Overall, I miss chrome...that Chevy had a lot of chrome and it was a part-time job to keep it waxed and polished.  Today's paint is so much better, I admit, and I haven't waxed a car in years, but back then it was a constant battle with rust, particularly around the fenders, and despite monthly waxings, rust usually won out.  But buff the dried wax off of chrome on a sunny, summer day, revealing your distorted reflection, and it was truly a spiritual experience.
I don't miss the frequency and difficulty in changing headlamps; the constant replacement of master cylinders, starters and generators; floorboards that rusted though to the point where you could see the ground; and terrible sounding radios.
I DO miss full sized spare tires, the concept of a real 2 or 4-bbl carburetor, scouring junk yards looking for parts and, alas, the days before strict seat-belt laws.
My old Chevy was probably crushed in a junk yard years ago, sadly, but I'd love to drive her one more time--and pull up to a gas pump to fill 'er up behind the license plate!
Posted by Dry Martini at 8:11 AM 2 comments:

Last Saturday, the town of Milan, Indiana, officially dedicated the Milan '54 Hoosiers Museum...a museum celebrating Milan High School's amazing 1954 Indiana State Championship as well as Hoosiers, the 1986 movie upon which that championship was loosely based.   The day was perfect...rain and clouds departed just in time for the parade featuring a couple dozen vintage automobiles....many convertibles with celebrities riding on top of the back seat.  The parade was similar to a parade back in 1954 when those cars were new and the teen aged players were celebrated as they returned to town following their big win.  Some of those players, including game-winning shot-maker Bobby Plump, returned for the museum dedication and ribbon cutting.  Some of the movie actors and producers were also on hand.  Did I mention that tiny Milan only had 161 students back in 1954?  It was an incredible victory in an era when all Indiana schools competed in the same tournament, no matter the school size. 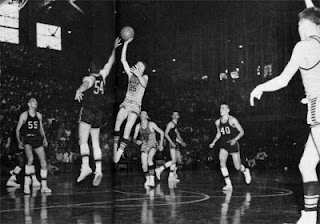 For Milan, the '54 Museum is a nice tribute to the "most important event in town history."  It's too bad every small town in rural American can't have such a thrill.  It's great to have something to be proud of....so proud, the old railroad water tower still bears the fading "Milan 1954" lettering.   As a neighbor of sorts (I live about six miles away), I couldn't be more happy for the town.  Admittedly, most of our family traffic takes us north, through the town of Sunman, and so I don't get to Milan too often.  Thus I felt a bit like an outsider during Saturday's big event.   However, I still feel a sense of pride and joy, despite having no connection to the Championship other than a framed certificate signed by some of the players and a piece of the Milan's "old" gym floor.
I think my happiness centers around one woman:  Roselyn McKittrick.  When we first moved to the area from Cincinnati in 1995, I happened into Roselyn's now-defunct antique store.  She immediately engaged her new customer in conversation.   What a delight! In one corner of the store, she had recreated the locker room of the Milan championship team, complete with signed basketballs, letter-jackets and photographs.  She told me then that it was her personal tribute to the team that brought fame to her adopted home town (she arrived a few years after the championship) and that she hoped to someday have a permanent museum.  Over the years, she would bend my year regarding any progress for the plans and, obviously, it takes many, many people from all over to pull off something like this.  But for Roselyn, it's a personal victory and I couldn't be more happy for her.  As someone who is trying to build a museum and organization myself, I appreciate the hard work and dogged determination behind such an accomplishment.  Dreams can come true and it fills my heart with optimism when "the little guy" pulls off a big victory like this museum--kind of like Milan itself!
In one room of the museum, a video of the original championship game runs in perpetual performance.  There were about a dozen people jammed into the room Saturday, including myself, and after a young Bobby Plump once again stroked a jump shot over an outstretched defender for the game-winner, someone in the group blurted out, "they won again!"  Everyone laughed and yet it was poignant...some things like the 1954 Milan championship and this small town museum are still kinda hard to believe.  Congratulations, Milan!
Posted by Dry Martini at 1:34 PM No comments: