It's a dreary, rainy morning and a palpable gloom has surrounded my single-bulb-lit office.  Amplifying energy-depleting emotions acquired from my hour commute from Indiana is the news I received only minutes ago:  Corwin has died.  This of course revives a personal long-held, inner frustration of having to explain to my peers and co-workers just who Norman Corwin was and why should they care.  The great talents behind the pens behind the stories are rarely remembered in broadcasting and Corwin, who worked gained and lost his fame in the 1940s, was as great at writing as he was about being forgotten to the masses.  But to those "in the know," he was nothing short of a greek god. 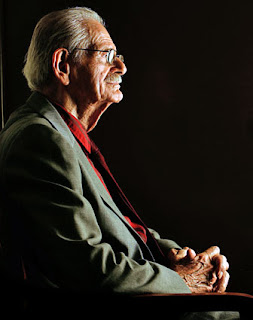 Boston born, Corwin rose through the media ranks as a scribe, first in print journalism, then in radio.  He was an enthusiastic hire at WLW in 1935 only to run afoul of the bosses when he questioned a station policy, published internally and stupidly on a memo tacked to the newsroom wall, prohibiting staff from mentioning strikes and labor issues in the news.  Notoriously anti-labor (Crosley's dirty little secret, shall we say), WLW reversed its praise of its newest hire whose political leanings always drifted around the "dial."  Corwin didn't take his subsequent firing lightly, turned the memo over the the ACLU and the press, and helped to arguably and single-handedly turn off the country's only 500,000-watt radio transmitter.
Corwin, meanwhile, only saw his stature rise.  At CBS, he became the first writer to have his name included in the title of a series.  His scripts were original, imaginative and provocative.  He could write an entire half hour in verse, he could write a story that evoked tears, prompted laughter, or anger.  Mostly Corwin's scripts generated thought.  No one, ever, had exploited the inspiration and potential of radio like this writer.  Before or since.  Corwin's "We Hold These Truths"--a celebration of the Bill of Rights, was broadcast over all three networks just days after Pearl Harbor.  Another nationally acclaimed production, "On A Note of Triumph," provided the other book-end to the country's biggest war, on VE Day.  Both are masterpieces of a nation that proclaims liberty as its foundation as well as its place in the world and should be required listening in every high school history classroom in the country.  Furthermore, these two shows are just representative examples of the hundreds of aural excursions led by Corwin that tickled intelligence and goosed consciousness.  Although stymied slightly in the television age, Corwin participated but he never forgot his radio roots.  His NPR production, "Memos to a New Millinium," is an example of how he continued to write special scripts into the new century.  Even as he blew candles on his 100th birthday cake, last year, he was still listed an adjunct professor at USC and lectured as his health allowed.
My first encounter with Norman Corwin came in 2001 when I interviewed him for a radio history documentary.  His LA apartment did not disappoint as it was peppered with modern artwork and awards from his storied career.  Corwin pulled out an ancient album which contained his day-by-day observations from the 1930s.  Despite a potential readership of only himself, Corwin's daily diary writings were eloquent, power-packed and brilliant.  I didn't want to leave that visit but, oddly enough, had a luncheon date with actor Eddie Albert at his Bel Air home for the same project.  "Tell Eddie hello for me," Corwin said.  Any actor worth his SAG card worked with Corwin and Albert was no exception, having narrated his "Prayer for the 70s" poem in the depth of the Watergate/Viet Nam era.
After that meeting, I began a brief mail correspondence with Corwin...nothing deep or significant.  But it brought me great personal pride when I received a note from him--that I KNEW Norman Corwin and, more important to me, that he remembered me.
A few years later, on another trip to LA, I called him up on the phone and asked if I could stop by and visit before my flight left.  "Of course!" was his reply and again we shared an hour, this time no microphone or tape running, which turned into an interview about ME.  Corwin wanted to know about my family, my Indiana farm, my radio career.  I never felt more awed by anyone in my life.  "Come by again," he said as I departed...but privately I knew that it probably never would happen.  Corwin was 98 years old, for goodness sake.
Norman Corwin's father lived to be 109 and his brother, Emil, died earlier this year at 104.  When talking those numbers, one expects that the angel of death, perhaps, had a degree of mercy.  I did a phone interview with him in 2006 and he sounded great.  But when I called him next on his 100th birthday in May 2010, his speech was slurred and he, although as gracious as ever, was difficult to understand.  The iron-man of the broadcast pen had suffered a stroke, I later found out.  Photos I've seen since had him frail and wheel-chair confined.  And yet he remained active, appearing at dozens of events until the very end.  He was scheduled to appear at an old radio convention in New Jersey next month.  At 101.
Lacking Corwin's eloquence, I fall sadly well short of a adequate tribute here.  If you get a chance, though, promise me you'll rent or find a 2006 mini-documentary called "On a Note of Triumph."   It won an Oscar for best short documentary and is all about Corwin and why he should be remembered.  In the coming days, you'll hear tributes from Bradbury, Shatner and a host of others who have been his friends and fans.  The term "writer's writer" has been so overused and yet it applies here. If you're still unsure about who Norman Corwin was and what he accomplished, for me, please do a little digging yourself and pass it along.  I promise your appreciation will swell along with many others who, like myself, admired and will miss this gentle, kind, thoughtful, talented soul.
If you asked Corwin what the humanity often lacked, he'd reply "decency."  That one word defines the life of Corwin.
Posted by Dry Martini at 7:24 AM