Cincinnati's legendary radio station WLW turns 90 years old today.  On March 2, 1922, the government (then the Department of Commerce, I believe) issued commercial broadcast license #312 authorizing the call letters WLW.  The station technically had been operating for several months as experimental station 8XAA.  There are some who claim the station was granted the experimental calls 8CR (for Crosley), but it would've been unprecedented to have a custom call at that time.  Anyway, WLW was born on this date and a big downtown gala was held several weeks later, on the 23rd.  WLW was the nation's 62nd commercial station, third in the area behind Hamilton's WRK (57th) and Cincinnati's WMH (29th), but the only one of those three to celebrate a tenth birthday. 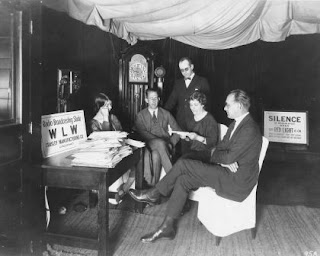 The station certainly has changed over the years--in both personnel and format--but its history is still pretty impressive.  It has been ranked number one in the Cincinnati market for over a decade now, which bucks a national trend of diminishing ratings for AM radio.  Certainly movements towards the boom in talk radio in the 1980s as well as the boost by the local professional and college sports broadcasts have helped.  But the proof is in the numbers and the station has long been the high tide that floated all local radio boats.
In 1928, owner Powel Crosley purchased rival WSAI and shifted local programming to "Cincinnati's Own Station."  Crosley also won the right to be one of the first stations in the country to broadcast at 50,000 watts and dubbed his station, located in the center of the nation's population, "the Nation's Station."  But the story doesn't end there...    Almost immediately, Crosley engineers laid out plans for 500,000 watts---a half MILLION watts!  Permission was granted in 1934 and  coverage area, staff size and advertising income quadrupled.
Power is an amazing thing and WLW had it both figuratively and literally.  By 1937, WLW was producing two dozen original programs, many carried across the network.  They also tormented NBC, its network.  WLW would pick and choose which network shows it was willing to carry.  On occasion, it would ask NBC to send the script because WLW felt it could produce it better with its own actors and orchestra.  Imagine Cincinnati's WLWT television today asking NBC for the script for this week's The Office because it wanted to produce the episode itself!   But 1930s WLW could pull it off because it kept teasing NBC by threatening to create its own network (WLW Line, the Mutual Network, etc.) and NBC couldn't afford to lose its largest affiliate.
The station had its ups and downs since the superpower era ended in 1939 (actually, late at night during WWII, they'd fire up the big transmitter for special government broadcasts).  The 1950s and 60s were a little rough because of the company's interest in television, but interest bounced back in the 70s with JFPO and the Reds, and the 80s with Scott, Burbank, McConnell, Cunningham et al .
I am proud to say I worked there for a year (1988-89) as a part-time newscaster ("Mike Morgan").  I started when the station was located on 4th Street downtown and was the first "regular" announcer to broadcast from the then-new Mt Adams studios (after the GM said a few words) on October 25th, 1988 (or was it the 26th?)  I remember that night fairly clearly and it was quite exciting.  The on-air staff, at the time, was not allowed to say "55" degrees because of bitter rival 55KRC.  Today the two former enemies are sister stations under the Clear Channel banner and the rivalry has been reduced to the fact that they are simply two studios, side by side, in a long hallway.
90-years is something special but can be put into perspective.  My kids have never known a time when there weren't computers, but I do.  I do not remember a time without television, but my parents do.  There are still many people walking around much older than radio.
Anyway, happy birthday to the "Nation's Station" and many more, I hope.
Posted by Dry Martini at 6:35 AM