Looking for The President

Before your time is wasted…no, not that President.  In 1988, 25-years ago, hosted its first “Tall Stacks” celebration to commemorate the city’s bicentennial.  It was a memorable and historic event that the city attempted to duplicate a few other times but none had the aura and energy of that first Tall Stacks.  One of the reasons Tall Stacks ’88 was my favorite was the selection of steamboats that visited the and specifically, in my book, was a chance to tour The President.  When ’s beloved excursion boat, the Island Queen, exploded in 1947, it was long before I was born.  And yet, growing up, I heard many stories and saw many photographs of the Island Queen and fell in love with the long lost boat (In 2007, I produced a one-hour radio documentary about the Island Queen, but I digress….)   So imagine my amazement in 1988 as I toured The President at Tall Stacks and learned that the boat was the twin sister of the Island Queen!   Both huge vessels were built, side-by-side, in 1924 as overnight packet boats to run freight and passengers between and .   The original name of The President was the .  But the stock-market crash wiped out the company and the was sold to St. Louis’s legendary Streckfus Lines in 1929 and in 1932 was reconfigured and rechristened The President, the largest excursion boat on the Mississippi.  Featuring a huge dance floor, a ride on The President was every bit as romantic and thrilling as a Cincinnatian’s ride on the Queen.  The boat plied the waters around until 1941 when it was moved to .  It came back to in 1978 when its huge side paddlewheels were removed and replaced by diesel engines and discretely hidden propellers.  The boat was otherwise intact when it returned to for its 1988 visit.


However, the ensuing years were not as kind to The President.  Caught up in the sweeping race to add riverboat gambling, The President was converted to a floating casino and sent to .  But greedy gamblers soon outgrew the boat there and The President, by this time a bit worn for the worse, was moved to satisfy gamblers in , then to .  In 1999, she was officially retired and towed back north, where, neglected, she slowly rusted away.  In 2007, a businessman conceived an idea to cut up The President into large pieces and transport the boat overland by truck   But steamboat fans know that such an idea is not so simple because of stresses and bends in the hull and that’s it’s nearly impossible to re-weld such a complicated steel steamboat puzzle.  For a couple of years, while the owner attempted to raise funds, the boat “chunks” sat in a field alongside busy I-70 in the middle of cornfields.  In fact, if you “google” the boat, you come away with the impression that the pieces are still there, patiently awaiting a welder’s torch.
to St. Elmo, Illinois, where, according to the plan, the boat would be reassembled and turned into a hotel—either on a lake or on land. 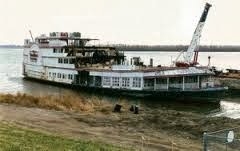 But that is not the case!  On our way home from vacation this summer, I convinced my sufferingly patient yet reluctant family to humor me and make a side trip in search of The President.  Using GPS map coordinates, we found the field easily but there wasn’t a hint or a scrap of steamboat to be found.  After we got home, I decided to call the St. Elmo City Hall and a very nice lady told me the town became tired of waiting for the owner to reassemble the boat and so it’s unsightly pieces were hauled away a year or two earlier.  “You might try Effingham (the neighboring town), but I think it’s all gone,” she concluded.  So I hope I’m wrong, but it appears this once fascinating steamboat has been relegated to the lost slate of maritime history.  Sigh.
Posted by Dry Martini at 12:52 PM