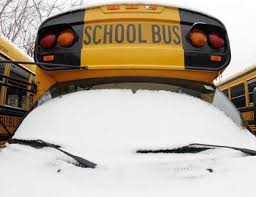 Seriously, though, I used to get a big kick reading school delays.  It was a challenge that required some thought as lists would come in somewhat scrambled and I, in my youthful logic, would organize them by location and by status (closed, one-hour delay, two hour, etc....there was always one school that would go on a 90-minute delay just to screw me up, but I digress...) using a clever system of red, blue and yellow highlighters.  I was quite proud of my school announcements and can only hope there were moms out there who appreciated my diligence and accuracy.
When I was working, all school closing came through a guy named Charlie Springmyer.  I never met Charlie...apparently he was just some guy who decided to be "the" clearing house for all school closing information in Greater Cincinnati.  I hope he got paid...in fact, I often wondered if there was a neighbor kid who tried to bribe him.  Anyway, school superintendents would call Charlie at his home and Charlie would compile a list and fax them (remember faxes?) to all the TV and radio stations.   I think I read once that Charlie had since passed on, but his operation still exists.
Meanwhile, at my old station (WVXU), in the early 1990s, we pioneered the "Snowflake Hotline."  We used carts in those days--a sort of plastic, 8-track-looking device containing a "loop" of audio tape.  Tape lengths could range from 10-seconds to 7 minutes and so it was my job to pick the correct length cart and record the school closing announcements and fill the rest of the tape with music.  Then we would disable the "tertiary" tone on the machine (which would otherwise stop and re-cue the tape at the beginning) and let that rascal roll all morning, until the next update came in.  Listeners could call in to a special hotline and listen to that recording.  It was pretty darned innovative for a small college public radio station (credit goes to our engineer, Jay Crawford) in that day and age and soon the big commercial stations were copying us.  By the end of the 1990s, we acquired a digital recorder (no tape!!!) that could hold an entire 1-minute!!  We thought it was the most amazing invention ever.  It probably recorded one kilobyte by today's computer standards but, back then, it was magical.
I also remember some school districts who seemingly never had school.  Grant County, Owen County, Mason County, Ripley-Union-Lewis, plus a whole range of "MRDDs" and "exempted villages."  They would seemingly shut down in mid-December and remain closed until the first daffodils popped out in April.  I often wondered if some of those districts required two calendar years to collect enough days for one school year.   Again, I digress...
Those were fun days.  Adrenaline flowed freely, mingling with the caffeine inside my arteries as Charlie's latest list came chirping though the fax machine.  And it was a public service, too, knowing there were thousands of little tots hanging onto my every word, waiting for good news or, by my omission, bad news.  And just read only four school names?  I'd never shirk my duty!
Posted by Dry Martini at 1:18 PM