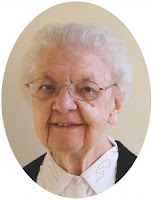 Sr. Frances Jean was a patient teacher, too.  While I liked playing the trombone, I had a conspicuous aversion towards "practicing" and, thus, I was never very good. Decent, perhaps.  Sister was an accomplished musician in her own right--a CCM grad who excelled on piano and organ, but who could also play flute and any of the brass instruments.  She was strict and could be riled a bit by an occasional uncooperative youngster like myself, but she never yelled (although she'd tap briskly a key on her piano to mark a sourly played note.)  She must have taught tens of thousands of students in her career, which spanned 65 years, at several grade and high schools. I wonder how many other students were introduced to new musical worlds because of her.  If patience is indeed a virtue, she earned her angel wings with me alone.
And I also wonder about current and future kids and lament the fact that there are far fewer opportunities for them to learn music the way I did.  Instrumental music requires practice and more practice.  Gratification comes in small droplets over weeks and months and it's tough for such sluggish endeavors to compete with the flash of video games and computers.  I've seen the numbers of my own high school band shrink every year and I am saddened that there aren't more kids who display the patience required to practice scales or paradiddles.  Also, are there enough teachers to endure the curious kids toe-dipping into the rudiments of a wide range of instruments--particularly the non-guitar and non-piano types?  Surely, FA music degree grads need jobs.
Sr. Frances Jean lived to be 97 and I'm sure music added years to her life.  She was playing trombone, herself, in several Cincinnati community bands well into her 90s.  At the time of her death she was still organist and pianist in her Oldenburg, Indiana religious community.
Meanwhile, It remains to be seen if or how music affects my longevity but I do know it has added to its quality and richness.  It's rare when I actually pick up the old trombone anymore, but I listen to and enjoy music daily.  If I could better articulate that influence, perhaps maybe some young person reading this would be sparked toward attempting to learn an instrument.  Just trying is half the battle.
Posted by Dry Martini at 3:08 PM