There was an interesting novel (later turned movie) called A Dog's Purpose by Bruce Cameron--maybe you read it.  Without giving too much away, it's the story of a dog who spends his life (actually, several lives thanks to reincarnation) trying to figure out his purpose in existence.  I enjoyed the story and have often looked into the eyes of my pets to contemplate what they feel their purpose must be.  For our dog, Abel, it's simple:  to bark relentlessly for an hour each morning into the darkness to chase away unseen ghouls and goblins that could be lurking in the fields behind our house.  But for our older dog, Charlie, it was a lesson learned only this week.
Actually, it was yesterday.  When he died.  After a long, sad, slow couple of years, old age crept up and stole him away.  At 14 1/2 years, this big black-lab-of-a-dog was not shortchanged by life--he did what he wanted as long as he could.  But despite the strength and size of his heart, time finally caught up and overtook him and left his tearful owner staring into the inky darkness and asking questions to himself such as: what would Charlie say was his purpose? 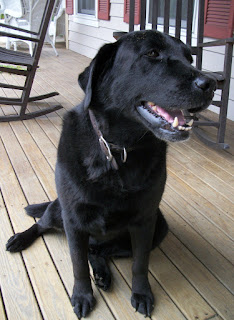 Well, my drooling, wagging friend, that isn't an easy question to answer!  From the day he entered our family some 13-years ago, Charlie made it very clear that he was "too cool" and "too sophisticated" for the average dog routine.  Charlie never retrieved a ball or stick (despite being a "retriever") and had no interest in impressing anyone.  Content with a dip into our mossy pond (his previous owners had a mansion and in-ground swimming pool) or a long nap in the sun, Charlie was nobody's fool.  That's not to say he wasn't easy-going...I've never seen an animal so laid-back.  Charlie wouldn't think of biting or growling or showing angry teeth.  Even when other dogs playfully nipped, he stood and took it without the slightest hint of fierceness.  A newborn baby human would be perfectly safe in his company. He did enjoy the occasional long walk in the woods and he loved a good snack...but a "purpose?"
The answer to that question became clear to me in recent days as I started to accept the dire reality of the situation.  As Charlie got older and it became painful to go up and down steps, he decided, bullheadedly, to spend most of his indoor time on the cool floor of the basement.  The obvious negative side of this decision was that it kept him out of normal family "activity."  Without such interactions, Charlie spent a lot of time alone and I felt terrible about it.  He did still enjoy days outside lying in the sun when weather permitted, but that wasn't always the case.   Even our long walks became harder and more unpredictable.  But he always there...and, boom, therein lies my answer.
Charlie was Always Just There and that's a wonderful trait to have.  When I needed a friend, he was Always Just There.  And when I was busy or tired, he waited, patiently, until he was needed.  Always Just There--the golden trait of any good friend.    I'd tell him my problems, complain about my day, and, for a small scratch behind the ears, he'd give me his close attention and those deep, brown eyes, which seemed to absorb my stresses and spirit them away.  No pressure, no demands...Charlie was Always Just There.
I tried to pay him back, even a few pennies on the dollar, this week as he started to fade away.  The night before he died, I spent hours on the cool basement floor alongside him because that's what friends do...they're Always Just There.  And now he's gone, and I miss him terribly.
Posted by Dry Martini at 1:16 PM