Michael Scott and the Office

When I was young, I loved television.  There were some really great shows and I certainly could rattle off a long list of favorites.  Ask me today, and my life is far too busy for TV and the commitment required to follow a favorite show...with one exception.  I've been watching the Office since Season One and I don't think I've ever missed a single episode.  When busy on Thursday nights early on, I'd fire up the VCR (a DVR?  come on, I'm cheap too!)  Oddly enough, I haven't watched a single episode on an actual TV for three years now thanks to Hulu, but I do watch.  Lately, the story line has followed the exit of Office "leader" Michael Scott as played by actor Steve Carell.  After seven seasons, Steve has decided to leave the show to concentrate on his movie career.  Since he is the fulcrum of the show upon which most of the story lines pivot, I cannot see how my favorite show can continue for another season.  The fact that he decided to depart early--with four half hours' remaining, gives me hope that he might "reappear" for four special episodes down the road but I have not read that theory anywhere else.  Short of that, perhaps the Office should consider "going out of business."
There is plenty of precedent to consider here.  Many of the Great (with a capital G) shows ended after seasons 7 or 8.  It seems like a nice, round number.  "Mary Tyler Moore" ended after season 7 and had, perhaps, the greatest final episode I've ever seen (remember "It's a Long Way to Tipperary"?)  "Newhart" had, perhaps, the funniest final episode (as a take-off of Bob's first series) but I never considered that show Great.  MASH had a memorable finale and it went eleven seasons, but I always considered that show to have two "periods"--the first three seasons with the characters Col. Blake, Radar and Trapper John...and the second, eight, with Col. Potter et al.  The character Henry Blake's off screen death was the "finale" for the first period.
In more recent years, "Everybody Loves Raymond," "Seinfeld," "Friends" and "Home Improvement" all went out because they chose to.  Ray Romano and Tim Allen became tired of their grueling TV work, so those shows obviously had to stop.  For Seinfeld and Friends it was more of a group decision.  All went out around the 8-season mark and all made the correct decision.  It's tough saying goodbye to someone you've invited into your home for so long, but nothing goes on forever.
There were some shows that lost a key character and decided to go on anyway and, in retrospect, perhaps made a mistake.  "The Waltons" lost John Boy when Richard Thomas left the show after the fifth season.  His absence was adequately explained for one additional season (that makes six) but in the final seasons, they brought a totally new actor in and explained that John Boy looked and sounded different because had been injured in the war...well, that was a poor decision.  "All In the Family," on paper, lasted 21 seasons but not really.  After season 7, Rob Reiner and Sally Struthers (Mike and Gloria) left the show and not long after, so did Jean Stapleton (Edith)!  It became "Archie's Place" and was a totally different show.  "Happy Days" went ten seasons, but only five with Ron Howard and Anson Williams.  It was a little painful to watch toward the end with an aging "Fonzie" and the Joannie and Chachi thing going.
My all-time favorite show--the Andy Griffith Show--lost Don Knotts' Barney Fife character after season 5.  Although Barney did come back for a handful of "return visits" to Mayberry, the show was left with a huge hole filled by the likes of "Warren," "Howard Sprague," "Goober" and "Emmitt."  It was never the same and even among us fans of the show, often episodes are identified as "AB" (after Barney) or not.  Andy Griffith mercifully ended after its 8th season.   It probably should have been after six ("I Love Lucy" stopped production after six, too.)
Sitcoms need about 100-individual episodes to qualify for syndication (Gilligan's Island was close enough, with 98) and that's where television immortality begins.  The Office has already passed that test and is already in syndication on some independent stations.  This season has had some very emotionally strong shows including last night's "Goodbye Michael Scott."  There's a feeling of finality that is inescapable.  We'll see how it goes next season--I'll give it a chance--but next fall will be the magic season number "eight" and the time might be right to go out with dignity (like Dick Van Dyck, Mary Tyler Moore and Raymond) and not as an embarrassment.   Meanwhile, goodbye, Michael Scott...you were a surprisingly complex, human and well flavored (Carell) character.  You made me laugh and cry and you'll be welcome in my home any time you want to return.
Posted by Dry Martini at 11:44 AM No comments: 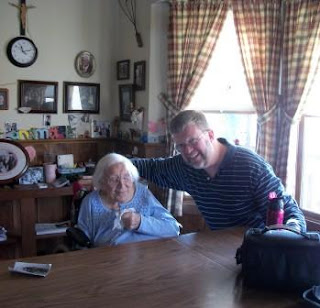 Call it an by-product of my ongoing mid-life crisis, but I've been fascinated, in recent years, by the passing of the last remnants of the 19th Century.  I've been following closely, and clipping numerous newspaper articles, the passings of the final WW1 veterans (which I've mentioned in a previous blog entry).  I've also been exploring the amazing number of people who exceed the "century mark." A famous friend, radio writer Norman Corwin, turns 101 next month.  His brother died last month at 107 (he was the oldest federal employee when he retired not too long ago!)  Their dad, by the way, lived to be 109.  Talk about having the right genetics!   In early February, there was a newspaper story about Besse Cooper of Monroe, Georgia.  She's the current world record holder at 114.  There's an entire web-site dedicated to "supercentenarians."  A supercentenarian is someone who is 110 or older.  There are about 90 confirmed and verified supercentenarians in the world and an estimated total of about 450 living today.  That's out of a world population of 6.8-billion, by the way.
Anyway, I was going though my clippings and was reminded that one of those 450-amazing people lives only about two miles away from where I live near Milan.  Mrs. Emily Weil was born November 20, 1899 and will be 112 next fall.  Her life has graced three centuries, 21-presidents and 10-popes.   She is, with little doubt, the last person I'll know connected to the 19th Century.  And that 1898 penny I collected as a kid that I thought was so amazing, was still shiny new when she was born.
I visited her recently to record an interview which aired on my radio program April 14 and fell in love with her spirit, her charm and her grace.  Although confined to a wheel chair and despite having poor hearing (her daughter-in-law, Marilyn, says she hates hearing aids!), her memory is pretty keen recalling all the world and personal events she has lived though.  Growing up in Crescent Springs, KY, Emily married a dashing young trucking executive in 1932 and they quickly had eight children.  But in 1943, her husband unexpectedly died of pneumonia and Emily was forced to go to school to learn nursing to bring in money and raise her children, the oldest of whom was only ten.  She did what she needed to do to get a decent job as a nurse at Drake Hospital and the family was able to grow up comfortably on a small farm near Mt. Healthy.  Although one child died, the other seven enjoyed rich lives, including a veterinarian and a missionary, with 25 grandchildren and 39 great-grandchildren to follow.   After retirement she learned basket-weaving and tatting and at age 100, she took up painting!  Her family self-published a book of her art.
A woman of great faith, she enjoys weekly visits by local priest, Fr. Frank Eckstein and the love and constant care of her son, Bob, and Marilyn and a home health nurse.
To go into all of the things she's witnessed in her life would far exceed the limits of this blog, so I'll conclude by saying that I'm proud to meet, know and become friends with the oldest known person in Ohio, Indiana or Kentucky.   God bless, Mrs. Weil and I pray many more happy years lie ahead!
Posted by Dry Martini at 6:22 AM 1 comment: