This isn't the first time I've written about my favorite show, The Office, but it will probably be the last since fans are on the doorstep of the penultimate episode.  The series finale is scheduled for May 16. 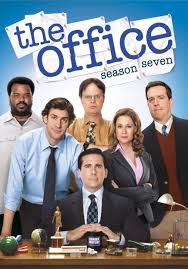 It's hard to say goodbye to a long running television friend.  I remember some of the emotions when Everybody Loves Raymond (my previous favorite) signed off...and Seinfeld...and Home Improvement.  And Mary Tyler Moore and MASH.  And the Waltons.  Usually I have only one favorite at a time and they've all seemed to overlap perfectly--because Raymond ended when it did, I can honestly say I watched EVERY episode of the Office.  I'm not sure what might be next for me or if there will even be another"favorite."  Thanks to technology, my watching habit has changed so much...although I haven't missed a single episode of the Office, I haven't actually watched a single episode on TV in four years!  How?  Hulu--one of the great cyber creations (particularly since NBC comes in so poorly at our house out in the country thanks to the stupid digital conversion, but I digress....)   When I started watching the Office in 2004, I was still recording shows on a VHS, believe it or not.
As far as the show itself is concerned, I have mixed emotions.  There's no doubt it is time for it to come to an end.  I've hypothesized before about how good sitcoms have a lifespan of 8 or 9 seasons maximum.  All of the above titles, plus my all-time favorite Andy Griffith, ran out of gas by season 9.  When Steve Carell departed the Office after season 5, it was the beginning of the end and most fans knew it.  The subsequent story lines and new characters were occasionally good and occasionally cringe-worthy.  Every so often, the writers would slap a hit but just as often, they'd swing and miss.  Every show (except the age defying Simpsons, perhaps) must eventually arrive at the point where the creative juices simply stop flowing.  For the Office, the show is ending at just the right time.
Still, there's a part of me that is sad, too.  There were some really interesting and rich background characters like Creed, Meredith and Stanley that should have gotten more stage time.  Meanwhile, the show was a nice diversion and dwelt on some quirks we've all experienced in our own workplace but I can think of a few they missed.  Many in the cast have gone from "obscure" to "movie star," which is satisfying.  I hope their careers continue to bring them fulfillment.
I am looking forward to the next two episodes and then we will all say goodbye and move on.  Storylines will be tidied up and, I'm sure, tears will be shed.  I've heard maybe even Carell will make a cameo.  Television has changed so much since Mary, Ted, Lou, Murray and the gang huddled in a circle and sang "It's a Long Way to Tipperary" as they exited the WJM newsroom for the final time.  I only hope the Office exits with the same class.  Meanwhile, I must decide if there's something else out there worthy of the title "favorite show."  Or maybe I've graduated beyond that, too.
Posted by Dry Martini at 12:09 PM No comments: