The Booth Gets the Boot

Recently, I heard a radio commercial where the storyline sends the customer "to the phone booth no one ever answers."  While the ad slipped by a few times before I really thought about it, it did eventually raise the question: do kids today even know about phone booths? 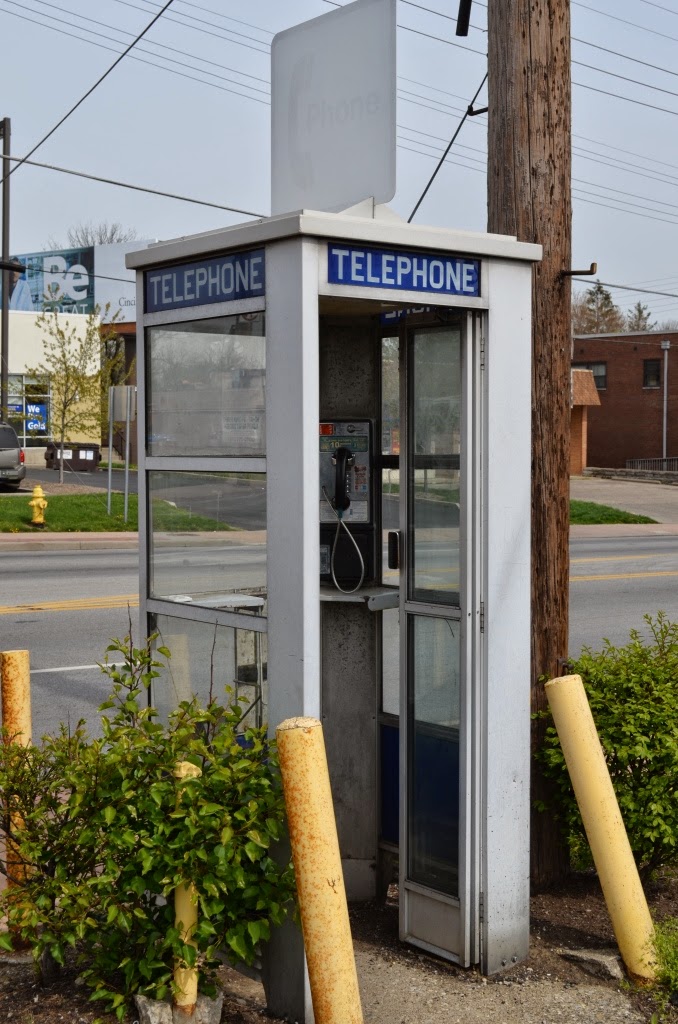 Coincidentally, I have noticed that the last remaining phone booth I know about in Cincinnati has been removed.  I'm not claiming it was "the" last one--there could be a few others--but it was the last one I've seen and it sat on Winton Road just north of the Brentwood Bowl until a few months ago.  For years I passed it on my way to work and one day the urge struck me that I needed to take a photograph.  Maybe the snapshot was the jinx because shortly thereafter it had vanished.
Of course the demise of the phone booth is easily explained in today's cellular world and this is less a lament than an observation.  Growing up, I only had cause to use the phone booth on rare occasion, even though mom made sure I tucked a quarter in my wallet "in case I needed to call home."  Mostly phone booths were handy sources of information because of the yellow- and white-pages bolted down securely inside.  Racked with a medieval iron-clasp device that only allowed the heavy books to swivel up and down in limited fashion, the security didn't prevent people from just ripping out the page or pages that they needed.  More than once, in desperate attempts to find an address or number, I left the phone booth grumbling because the exact page I needed was gone.
I also remember the graffiti in phone booths with phone numbers and, often, accompanying obscenities displayed for all with black "sharpie" permanence.   And the difficultly opening and closing the accordion folding door.  And trying to be heard on the phone during a downpour.  Still, despite the gaps in the side panels and the obviously transparency of the scratched, dirty windows, I always felt safe and secure inside a phone booth.  A little "time out" space from the busy, noisy craziness outside.  A shared fortress from chaos.  Even the name, phone "booth" sounds far more cozy than, say, phone "shack" or phone "
shelter."
Obviously, the cell phone is cheaper, easier and rarely has pages torn from its memory banks.  Meanwhile, the phone booth joined the cassette and the film camera in obsolescence many years ago.  However, I've learned a great life's lesson from the phone booth and I'll share it with you now:  I learned that... (**sorry, if you'd like to continue this blog entry, please deposit another quarter into your computer**)
Posted by Dry Martini at 7:34 AM No comments: