Today is one of the most historic days in broadcast history.  Okay, maybe not….but I’ve managed to keep your attention for one sentence longer.   It was on this date, 25 years ago, that “” went on the air and I was the first regular announcer to broadcast from that legendary (or “notorious”?) facility. Honest injun.


After working a year, part-time, at Warm98 in 1987, my wonderful boss, Tracy West, was "dismissed" and I started to look for someplace new.  My fulltime job was at WVXU, but I wanted to keep a weekend presence on commercial radio.  On October 10, 1988, I was hired by Kathy Lehr as a weekend, overnight, news anchor using the name “Mike Morgan.”  Those first few weeks’ newscasts originated from the dingy, dated WLW studios in a building on downtown but I was well aware that new studios in would soon be ready.


It was an interesting job.  The downtown studios were dark, decorated in mid-‘70s furniture and yellowed with nicotine stains.  The studios were separated by glass windows and the news booth was cramp.  Studio B, for talk shows, had curtains and they were often drawn shut for the nights Bill Cunningham had “The Fun Girls” on and my imagination reeled as “Sudden Sam” ran the board in the control room. 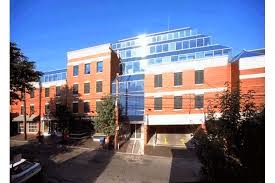 Meanwhile, a mile or two to the east, 1111 St. Gregory, in Mt Adams (dubbed “” in tribute to the new station owners) was bright, beautiful and state-of-the-art.  The news staff was taken up there several times before we moved so we could become acquainted with the palatial newsroom, with its clever individual production “stations.”   My engineer friend, Jay Crawford, was working up there on weekends assembling the new studios for WEBN, which would go on the air a few months after WLW—so I had someone to talk with.  Finally, the big date arrived and I just happened to be the one on duty that night.  On Friday, October 21, I was instructed to write two newscasts for the 11 p.m. hour and presented one downtown at 11:30 before hopping in the car and heading up the hill.  I never set foot in the building again.


That very first night I immediately experienced what would be one of the downfalls for : the parking garage was full and I had to find a place on the street.  The reason quickly became apparent when I entered the WLW studios and found the place full of happy people dressed in elegant dresses, expensive suits and holding cocktails.  I went about my business making final preparations as, by then, midnight was quickly approaching.  With minutes to spare, I entered the polished, new news-booth and waited.  At midnight exactly the switchover occurred.   One of the station bigwigs (I can’t remember if it was the GM at the time or someone from Jacor but definitely NOT a regular on-air person) expressed a few appropriate remarks now lost to the ages (I don’t think the affair was recorded) and then he ended with: “…and now let’s resume regular programming!”  At that point every well-coiffed head and drink-sipping suit turned and stared through the glass and into the news booth, occupied by a quivering, rookie newscaster who, I’m pretty sure, stumbled over the first few words of his news-copy.   After that, the party pretty much ended and the tipsy folks bid farewell and, gradually, departed.   By 12:30 am, 10/22, it was just me, either Dusty Rhodes or “Party with Marty” Thompson, and a few wayward engineers cleaning up.


And that’s my brush with immortality.   I worked there the better part of a year and, boy, do I have a few stories which I'll save for a later post!  Thank goodness for the blog because it gives goofballs a chance to share memories of which very few care except for the one typing.
Posted by Dry Martini at 6:59 AM No comments: