Recently, the powers that be decided to postpone the next Tall Stacks celebration to, possibly, 2014.  For those not in the "Cincinnati know," Tall Stacks is the bi-annual or quad(?)-annual Ohio River history celebration featuring "authentic" steamboats, people in period clothing and lots of commemorative souvenirs.
Being a history geek, I like Tall Stacks--don't get me wrong--and have attended, in some form or fashion, every edition since the very first event in 1988.  Ah, 1988!  I remember it well!  By far the best Tall Stacks, 1988 was focused mostly on the boats and less on the schleck.  In addition to the Delta Queen and Belle of Louisville, there were boats from from New Orleans, Pittsburgh and the upper Mississippi.  The star of the show, in my mind, was The President--a huge, lumbering excursion boat based in St. Louis.  The President was built in 1925 and was the sister ship to Cincinnati's beloved Island Queen, which ran to and from Coney Island until she blew up in 1947.  The President had undergone some poor updates over the years, but one trip across its huge dance floor and a young geek like me, born nearly two decades after the Island Queen, could get as close as possible to the experience of my parents.   It was an absolute thrill!
Which leads me to another great thing about 1988--visitors would buy a "passport" that would actually get them onto the boats for guided tours.  Sure some people just had their passport booklets stamped with the insignia of each boat for a collector's item, but I was there every day waiting in line to tour each and every boat.  I had been on the Delta Queen before, so I focused my efforts toward getting on the other boats, such as The President, et. al.  I remember the tour on the Belle of Louisville, built in 1914 and the oldest boat there, gave us visitors unbelievable access to the pilot house and the engine room.  That tour alone was worth every penny of the passport program.  I chatted with the captain.  I played a note on the calliope.  I snapped all the photos I could.
Alas, I suspect too many people joined me on the tours because they were eliminated from the next and all subsequent Tall Stacks.  Maybe some of the guests were unruly or they tampered with the fragile boats, ruining it for everyone else. Too bad.  I can't afford to buy an actual dinner cruise on each boat.
Which brings me to the "next" Tall Stacks--originally slated for 2009, then 2012, then 2013 and now 2014.  Organizers are having trouble raising money and, sadly, I suspect why.  Times have changed and people just aren't as interested in coming down to see boats from the river bank haul other people out on cruises while they are forced to stand and watch.  To improve safety, the boats departures are staggered, meaning rare is the time when they are all tied up on shore, killing any chance for a decent photo-op. 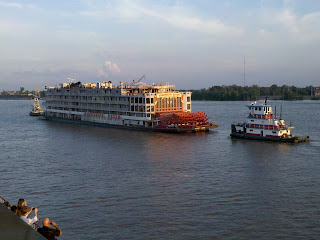 The biggest change, for me anyway, is who will NOT be there next time.  The President, sadly, was carved up into little pieces and hauled to a lake in the interior of Illinois sometime in the 1990s.  Some guy plans to sew her back together and float her on a lake there but that will never happen.  Vandals have stolen most of the copper and brass pieces and the other chunks are rusting away in a field.   Of course, that's still a better fate than the Mississippi Queen (built in 1976,) which was tied up to a dock in New Orleans after her parent company went bankrupt only to be overrun with mold and mildew.  The only recourse was to entirely scrap her.  The Mississippi Queen no longer exists (the above photo was taken as she was towed to the scrapyard).   And then there's my personal favorite--the Delta Queen.  So sad.  The Queen is tied up in Chattanooga and will never sail again.  The Safety at Seas Law made sure of that.  Even if she could get a new round of exemptions (the law was made for ocean going vessels but frankly, what did her in was being a non-union boat during a Democratic administration, but I digress), she needs a new boiler, which is located deep in her hull.  She have to be taken apart, literally, just to replace the old boiler and that would be too expensive.   Frankly, I'm just not as keenly interested in the "newer" boats--you know the ones...built for excursions and powered by hidden diesel engines so its speed doesn't match the rotating, fake paddle wheel.  They're cute the same way fake kit cars are cute, but they can't replace an original.
So bring back Tall Stacks, I'll probably come down to take a look, but it won't be the same.  I even promise to spend a 20-spot on a souvenir mug or shirt or something.  Still, let this be a lesson.  Rather than try to recapture the magic of Tall Stacks V. 1 (or World Choir Games V. 1), it might be better to just remember how lucky you were to capture lightning in a bottle the first time and come up with an idea that's entirely new and untried and original.
Posted by Dry Martini at 1:29 PM No comments: