Continuing an annual tradition, I enjoyed watching both "A Christmas Carol" and "It's A Wonderful Life" (although I did watch, for the first time ever, the George C. Scott version of "'Carol" this year instead of my favorite, the 1970 musical film "Scrooge.")  I also found a scholarly essay recently on-line comparing the themes of both stories as commentaries on redemption and second chances.  The essay made some interesting arguments but also missed, I feel, a key difference:  that Scrooge, an essentially bad guy who lived a life of unhappiness, lived a very different life from George Bailey, a basically nice guy who made many friends and sacrificed his happiness for others.  Scrooge needed a "spiritual" guide to point out his errors and make reforms while George's spiritual mentor pointed out the good things to boost George's self image.  Both, we assume, amended their lives--Scrooge externally through his treatment of others and George internally through a new found self-realization of the source of true happiness.  So, "yes" redemption is a concurrent theme but for different reasons and with differing outcomes.
Speaking of second chances, I find it ironic just how much "It's A Wonderful Life" represents rebirth.  As many know, the movie was a critical success but a bit of a financial flop when it came out in 1946.  So much so that in 1974, when its original 28-year copyright expired, the studio felt so little about it that it neglected to renew the movie's copyright--an act that, essentially, consisted of filing a short paper and sending a nominal check.  By 1975, "Wonderful Life" became public domain right smack dab in the middle of the rise of cable television and the expansion of the UHF dial--an era when plenty of broadcasters were looking for cheap, if not free, public domain things to fill air-time.  For the next 18-years, it was a free-for-all and Wonderful Life was showed dozens of times every December by any and all networks and cable channels.  Furthermore, no less than twenty companies released the movie on video cassette, often finding its way to the dollar bin at the local drug store  The period was successful reviving interest in the film, establishing a another holiday tradition and introducing a black and white classic film to a new generation.
In 1993, Republic Pictures, which had acquired the library of the now defunct Liberty Films, saw dollar signs flying through the air and sought to re-acquire the copyright to the now valuable property.  While the film itself could not be re- copyrighted, the studio's lawyers cleverly figured out a back door way to lock down film--examining old contracts, they discovered they still owned the musical soundtrack rights and, more important, they owned the film rights to the original story from which it was based--a forgotten short story called "The Greatest Gift."  By exercising these rights, no one could sell "It's A Wonderful Life" without permission unless they rearranged the entire plot and replaced the music.  Those claims were asserted in court and only NBC has the limited broadcast rights.
So "It's a Wonderful Life" is lucrative today because a studio which did not produce it originally has greedily found a way to make money off of it.  Meanwhile, the film's popularity...it's "second chance" and "redemption"...came about because of a clerical error in 1974 that allowed the film to be shown again, albeit temporarily, in the public domain for nearly two decades.  Oh, and it has a character named "Martini" which is pretty darn cool, too!
Posted by Dry Martini at 8:04 AM No comments:

One odd quirk of the wandering midlife mind is the occasional daydream and sudden recollection of things that have seemingly disappeared without much notice.  While driving in to work this week, I suddenly realized that the old fashioned "search light" is a thing of the past.  No, not the little dinky lights one occasionally finds on boats or on buildings.  I mean the big, honkin' truck sized lights of my childhood. 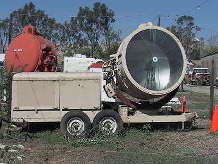 Growing up in Bridgetown, on Cincinnati's west side, we lived about two miles away from the Western Hills Plaza and the Western Woods (mini) Mall and, usually, once a month, when I was a boy, a local store would set up a search light--particularly around the holidays.  The Plaza, in particular, was the frequent host of search lights--often in front of McAlpins.  These lights were amazing, powering up a solid beam of light that could be seen for several miles.  The luminescent shafts would lazily swing back and forth, beckoning one and all to the pot at the end of the rainbow.
Up close, the "pot"was amazing.  As a boy, I had no understanding of the engineering behind a "carbon-arc filament."   All I saw was a big bowl, as large as a Volkswagen, with a polished mirror back and a bright flame in the middle.  The apparatus made noise and a hissing sound as it rocked back and forth on the back of a large trailer or on a truck.  Only recently did I learn that Cincinnati was a national hotbed for searchlight technology, thanks to the Carlisle and Finch light-works company, which still manufactures searchlights, albeit smaller versions.
I also recently found a web-site dedicated to searchlights and even found some old ones for sale.  But a brief scan of the Yellow Pages reveals that, alas, no one within a hundred miles of Cincinnati still rents the "big" lights anymore.  Maybe if I find a few extra pennies under the couch, it would be an interesting side business.
But who, really, am I fooling?  The wide-eyed boy from 40-years ago has been replaced by a new generation of kids brought up in an era of computers and other stimuli.  Merlin's magical lights pale in comparison to the wizardry of the electronic age.  If only the searchlights could "do battle" or morph into laser-shaped monster characters or something.   *sigh*
No, perhaps, the search light is best left on the shelf with baseball cards, the drive-in theater, Shillito's Christmas display, the C G and E trains and a host of other once-amazing memories of a mid-life guy who spends too much time living in the past.
Posted by Dry Martini at 7:28 AM No comments: