Fifty years is a blink of an eye in the life of a mountain and yet it's been fifty years since JFK was inaugurated.
Fifty years is a mere hiccup in lifespan of a sequoia and yet for the home computer, it has exceeded its existence.  Fifty years ago, the Reds played in the World Series minus Joe Nuxhall.  The "Good Guys" were just starting on WSAI while "Ma Perkins" was being cancelled.  Cincinnati was just getting used to life with only "two" daily newspapers and tensions were heating up in divided Berlin, forcing a call-up of a certain Air National Guard unit in Blue Ash. 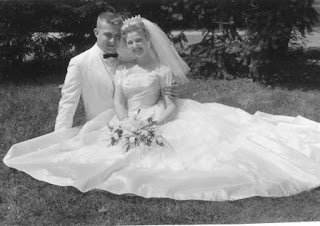 The time was ripe for a crew-cut haired shy young man and an outgoing slender Price Hill-ian to wed, fifty years ago today, at St. Teresa of Avila church near Prout's Corner.  Photos were taken, the usual gags were cast, smiles, grins, prankishly staged photographs.  Rice was thrown, shoes were tied to bumpers.  The nearby reception was simple and steeped in Western Hills flavors...no need for a limousine when you can ride in the back of a 1940 Ford coupe with the top sawed off and covered in cartoons of Snuffy Smith.  Lots of laughs and sun and optimism with all eyes firmed fixed on the future and its "nothing but blue skies."
That's not to say clouds haven't appeared now and then...an argument here, a few harsh words there.  Financial stresses, social pressures, the birth of an (adorable) son...now and then emotional thunderstorms that knock you on your tush only to eventually calm, exit, and pass back into sunny skies again.  No trip is worth traveling unless there are a few bumps along the way...living life "too easy" is not living "life" at all.
But looking back over fifty years of marriage, one can only admire and cherish volumes of memories and experiences shared between two people in love.  The memories have become trophies, not burdens...and even the bad ones have faded to the point where they only amplify the good ones.
Fifty years is wonderful achievement and certainly just another milepost on a much longer journey.  But in today's world of divorces and promiscuity and simply "giving up" (not to mention the millions who choose not to make the commitment in the first place,) I'm proud of mom and dad on their big day and hope I can follow in their example.

Posted by Dry Martini at 6:28 AM No comments:

Well it's happened...a dollar for a daily Enquirer.  Starting yesterday, unannounced and without any uproar, the Cincinnati daily raised its price tag for the second time in just a few years.  I sort of knew this might be coming--about a month ago, us "Indiana folk" were given a special preview when daily papers for "out of town" readers were increased to a buck and Sundays went to $2.  I guess they decided to bring equality to all readers.
I still don't know why newspapers are losing money, given the quantity of advertisements.  The Tuesday paper I hold in my hand is about 20 pages total and 90-percent of the content is ads.  And not just regular advertisements but the "new," computer age ads that have odd shapes and force the typesetting to wrap around the odd shape.  This is particularly annoying, but I'll save that for another day.
Speaking of annoying, I still fume when I remember how the Enquirer charges MORE for the Thanksgiving Day paper...with all of the additional ads, you'd think they would charge LESS since they're getting all that additional income.
When I was young, I always wanted to have a career that would garner me a special "write-up" for my obituary.  Kind of a morbid thought, I know--particularly since I'll be dead and won't be able to clip the story for my scrapbook, but I digress--but the fact is becoming apparent that either a) there won't be a daily paper or, b), no one will be able to afford to buy it.  I guess there's always on-line.
I am a newspaper junkie, not two ways about it.  When they increased the daily paper to 75-cents from 50-cents about four years ago, I really did have second thoughts.  Now at a buck, I am befuddled.  If they are really that short on income, I sympathize, but they're only going to drive more people away.  And then who will be the chroniclers of history when the daily paper is gone?
Posted by Dry Martini at 7:29 AM No comments: