The Boy Packs Up

Our oldest child is heading off to college this weekend.  In a ritual repeated throughout time immemorial, but new to me, the little bird is leaving the nest.  “The Boy,” as I affectionately call him (‘tho there are three brothers behind him), seems ready to go.  Like a sprinter at the Olympics, he has comfortably settled his shoes on the chock blocks of life and awaits only the sound of the starting pistol. 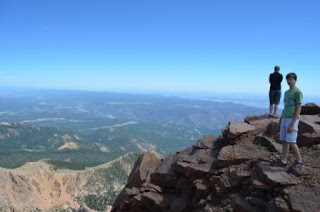 The Boy is excited, and why shouldn’t he be?  He is standing on top of a mountain and the world--a fat, exciting, ripeforthepickinging world--lies in front of him.  In fact, a few weeks ago, we visited on vacation and a photo of him and his brother now rings quite poignant.  In many ways I share in his joy and add a pinch of jealousy…it’s been a few years since I stood on that same vista.


As “dad,” I’ve had several months, nay years, to prepare for this weekend and yet I feel caught totally off-guard.  The other morning, I awoke around 2-am upset because I never took him to Terry’s Turf Club for an award-winning cheeseburger (eating is a favorite hobby for both of us.)  It was on my “list” and I failed. (I won’t even attempt to use the excuse, “I didn’t have time” because that’s an overly-cited, weak, and lame argument.)  Other missed opportunities tumble through the “sprockets” of my “guilt projector”… there are old movies and cartoons I failed to share with him.  I don’t think we played “pickle” enough and I never taught him “Kick the ”  He’s never joined me on a golf course or a driving range.  We haven’t been to the Air Force Museum in since he was a little baby.  I never introduced him to “real” pulled pork BBQ.  ?  Nope.  When he was about five and learning to ride a two-wheeler at my wife’s office, a neighbor took the training wheels off Boy’s bike and witnessed something I only heard about later after I came home from work.  Harry Chapin’s “Cats in the Cradle” played in my head for two weeks after that one.


Before you call the police for “suspected self immolation,” I am not entirely wracked in guilt.  I do not feel short-changed—indeed, knowing friends who have lost children to death or illness—I feel grateful and Blessed for 18-years and all those times we did have together…fun and not-so-fun.  Last spring, Boy and I attended a rock concert together (check that off the list) and just last week we had a nice father/son dinner at a restaurant.  Everyone reading this has either had a child grow up and leave home, or left a “home” him- (or her-) self....me included!  One of the shocking lessons most people experience months and years later is that life, in fact, goes on.  (My big shock came when my dad first re-recorded the “home” answering machine with my name omitted, but I digress…)   The ancient Greeks had a phrase:  “Panta rei” (things change) and Thomas Wolfe told us You Can’t Go Home Again, but I hope The Boy doesn’t stray too far and remembers he can always come home.


Gabe is big and tall and handsome and adult now, so I’ll have to reconsider that nickname, too, I guess.  But not right now…not yet.
Posted by Dry Martini at 8:51 AM No comments: