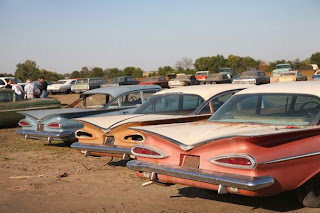 Posted by Dry Martini at 2:10 PM No comments:

Marian McPartland and Me

One glance at the title of this post and the reader might be mislead and so I'll immediately fess up and say this is a story of scotch, ignorance and a major goof. 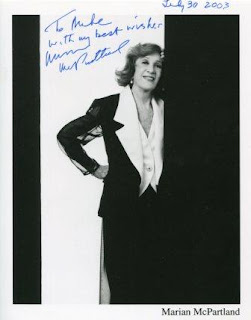 The events took place in the Spring of 2003.  Licking our collective woulds over a Peabody snub for our audio documentary, Cincinnati Radio: The Nation's Station, 1921-1941, my WVXU boss, Dr. James C. King, treated co-producer Mark Magistrelli and I to a trip to New York City to pick up a New York Medal award.  Not quite as prestigious of an accolade, it was, however, a free trip to the Big Apple, so off we went to the Marriott on Times Square where the awards banquet would be held in the hotel ballroom.  As it turned out, Mark decided to attend another event that night and so Doc and I dutifully trudged off to the event, open bar and all, to receive the award.  Don't get me wrong, it was a very nice event--but neither Doc nor I are great socializers and as the drinks flowed, the silliness of the pomposity of the evening became more and more apparent and small, under-breadth comments were exchanged between us.  Also slightly amused at the proceedings were two quiet, but pleasant, women seated to my left at our table.  We exchanged small talk.  The woman next to me was named Shari and she was a producer at a station in South Carolina.  To her left, she introduced, was an older woman, simply, "Marian."  I said hello and we shook hands.  Shari seemed very nice and joined in a bit on our comic play-by-play commentary.   Eventually, our station's call letters were announced and Doc and I went to the stage to accept a "Best Documentary" award.  Marian, the older woman, gave us her congratulations as we returned to the table.  Shortly thereafter, the announcement of "Best Music Program" was announced.   "Marian McPartland's Piano Jazz!" (you probably know where this is going, by now.)  I slunk into my seat.  "That's....?"  To make matters worse, our station used to carry Piano Jazz years ago, but cancelled it because of a shortage of financial support.  Well, Marian barely sat down again before she said she was tired, bid us adieu, and left us to return to her room.  Shari Hutchinson, her longtime producer, remained and entertained us with delightful stories of working with this great woman and jazz pioneer.  By the end of the evening I felt slightly less of an idiot for not recognizing Ms. McPartland and boldly asked for an autograph, which Shari kindly mailed to us days later.
So that's my Marian McPartland story!  The nice thing about "time" is that it eventually allows us to laugh at the mistakes we make.  In the meantime, rest in peace Marian McPartland--a jazz and radio legend who died last week at the age of 95.  And congratulations to Shari Hutchinson, who, I understand, now manages eight public radio stations in South Carolina.
Posted by Dry Martini at 1:42 PM No comments: