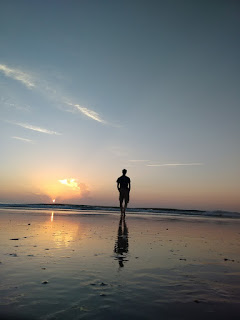 I remember being his age and staring at that same ocean on that same beach.  I remember thinking about the title of the Beach Boys' album "Endless Summer"---what a contradiction!  Of course summer isn't endless...no more than the span of boyhood, itself.  Vacations, summers, high school exams, boy scout jamborees--all must come to an end.  And then we move on.  And yet, one might stand on a beach, toes dancing in the incoming foamy surf and be suddenly overcome with feelings of permanence and eternity.  That ocean, that beach, probably hasn't altered its course much in millennia.  The tides churn in and out rhythmically and predictably every hour of every day of every year of every century.  Surely, there must be "endlessness" here, true?  By the way, the same can be said for those who ponder a mountain or an old-growth forest, if that's their preference.
So which is it...and what about that 18-year-old standing on the doorstep to independence and a bright, alluring, exciting world extending as far as an ocean horizon?   Well, perhaps there is a sense of permanence when one considers his or her "home."  I remember dipping my "toes" into adulthood cautiously, because I knew that if the sands would shift awkwardly, I always had a place to which I could return home (thanks, mom and dad!).  I feel badly for those who leave home in anger or disgust and never look back.  I hope Tony...er, Anthony...knows that somewhere a lamp is lit for him if he needs it and that the regular, predictable "pulse of the tides" awaits him, day and night, no matter where in the world he chooses to explore.
By the way, Tony took the photograph using his cell phone propped in a flip-flop sunk in the sand, so photo credits go exclusively to him, the talented fellow!
Posted by Dry Martini at 3:32 PM