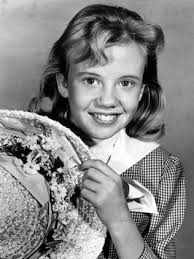 I was a young man...well, boy...when I watched "Pollyanna" on television--probably the Wonderful World of Disney.  Okay, I was only 5 or 6 years old.  But I was captivated by your performance.  When your character fell off the ledge of the house and lost all interest in her recovery, I knew then you needed a man...er, boy...like me to take care of you.  I don't remember much about the rest of the movie actually, and probably have seen it only once since, but I was prepared to abandon my luxurious 5-year-old lifestyle and hop on a train to come to your side and help you.  Instead, in our local newspaper's "TV Guide," I clipped out your small photo and kept it in my new vinyl wallet for several years, until it literally fell into pulp fiber dust.
And then it happened!  It was around 1973 (as I recall), when someone gave me a World Almanac as a gift.  One of the sections of the almanac was "celebrity birthdates" and I quickly dashed through the "A's," "B's" and arrived at the "M's" and found out when you were born.
...And I was crushed.
I then looked up when "Pollyanna" was filmed (1960) and did the math (I was never very good at math but could figure this one) and the realization hit me:  Our relationship wasn't going to work out.  I hope you understand but a May-December relationship probably wouldn't have gone over well in my childhood world.   Plus, you've never heard of me.
Being brave, and by this time focusing my attention on my first grade classmate (also unrequited, by the way), a lovely girl named Sherri who looked a lot like Pollyanna, I decided to break it off with you.
In retrospect, it probably wouldn't have worked out anyway.  I did get teased a lot about "us" by my parents and friends.  In time, memories faded and only occasionally, over the years, did I remember that wallet-sized newspaper picture.  But I have no regrets.
There is something about those grade-school age "crushes" that I miss.  The reminder of those new feelings during an age when just about every feeling you had was new.  The childlike brain was just a mushy ball of emotions and physical changes that seemed to have no logical purpose.  In some ways, I'm sad those days of surprise are long gone, replaced by more calloused, retreaded emotions.  And yet, I would not want to re-live my childhood a second time.  I'm fortunate that, sometimes, I can still summon those deep down feelings from the hard drive of my memory banks.
Well, I must close now, but I wanted to send this along to "whereeveryouare."
Happy birthday, Hayley.
Posted by Dry Martini at 10:58 AM